Dallas, Texas, the ninth-largest city in America and the third-largest city in the state, is quickly becoming one of the more “hip” areas in Texas, rivaling its neighbor to the south, Austin. With tons of different thing to do around the city, tourists find themselves rather hungry after a long day of sightseeing and shopping. Below is a list of some of the best restaurants to visit when traveling on a budget. 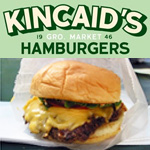 Established in 1946 in Fort Worth, TX, Kincaid’s Hamburgers actually started out as a grocery store and marketplace. In 1964, the main meat cutter at the store began cooking up some pretty amazing burgers, and started selling up to 50 burgers a day. A few years later, as business began to really pick up, Kincaid’s was named as the best burger in the country by a panel of nationally renowned critics. Today, Kincaid’s can be found in six locations across Texas serving some of the freshest burgers and sandwich in the US. Visitors enjoy their 1/2 pound burgers, stuffed halapenos, and ice cream.

From burgers to gyros, chicken sandwiches to kabob dinners, Tex’s Star Grill is famous for being able to please the entire family. With their Chicago connection, Tex’s Star Grill is well known for having a diverse menu that anyone will be able to enjoy. Diners especially enjoy the Original House Sauce — the mysterious sauce that is full of a delicious Texas flavor. And since everything’s bigger in Texas, you better believe that applies to the portions at Tex’s Star Grill: they’re food will leave you full without leaving your wallet empty!

Looking for a classy restaurant that won’t completely leave you broke? Chiloso Mexican Bistro is the place for you. With specialty items like grilled poundcake, grilled avocados with barbacoa, and a fantastic tortilla soup, Chiloso will blow you away. Don’t forget the Mexican staples, though. Chiloso Mexican Bistro also offers loaded nachos, burritos, bowls, and even salads. Since 2005, Chiloso has been serving the freshest and boldest flavored Mexican food, without charging their customers unreasonable prices. Stop in at any of their three locations soon!