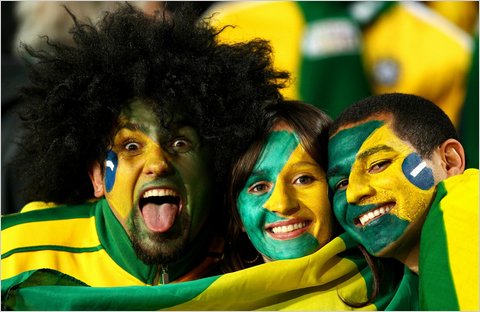 The World Cup in Brazil this summer promises to be a huge party, in a nation known for both its partying skills and its soccer prowess. Supporters of the 32 countries taking part will be flying in from all over the world; if you’re thinking about joining them, here’s a quick preview of some of the most hotly anticipated matches and a taste of what to expect when you arrive.

Brazil is a huge country! The northernmost host city, Manaus, is a six-hour flight from Porto Alegre, the southernmost, including a stop in Sao Paulo, Rio or Brasilia. That means you need to plan in advance which matches you want to see, and book hotels and flights accordingly.

One of the most popular games is likely to be the opening match, in which the hosts take on Croatia. It kicks off at 17:00 (all times are Brasilia local time) at the Sao Paulo Arena on 12th June. Brazilian fans are known around the world for being perhaps the most passionate and almost certainly the noisiest, and any Brazil game will be an unforgettable experience. The controversy surrounding the build-up to the tournament will be forgotten – at least for 90 minutes!

If you’re going to Sao Paulo, you should know that it’s paradise for meat eaters! Churrascaria restaurants like Vento Haragano are unmissable for carnivores; the food is of superb quality and you won’t believe the quantity! Try and visit the Municipal Market as well, to get a feel of the bustle of city life – and ogle the produce.

A repeat performance of the 2010 Final takes place on 13th June at the Arena Fonte Nova in Salvador. Spain will play the Netherlands; the 2010 game was a particularly ugly one, with the Dutch players committing a series of terrible fouls. Spain won, and as holders of the World Cup, the match promises to be amazing. Salvador is all about the beaches, with surfing, diving, sailing and swimming all possible.

If you want to see a giant of world soccer take on a minnow, try Argentina v Iran, on 21st June at 13:00 in Belo Horizonte. The final score is likely to be a little one-sided – unless Iran can pull off a miracle! There’s plenty to do in the city – pick a spot and take in the mountain views, or visit the Palacio das Artes for a concert. There are some great restaurants here as well – try the grilled fish at Restaurante Atlantico.

Our final pick from the group stages takes place on 22nd June, as the USA take on Portugal at the Arena Amazonia in Manaus. The US is not expected to progress to the next stages, as Group G also contains Germany and Portugal. Ghana also have the ability to beat some surprising teams, and will be fighting hard. It’s the World Cup, however, and shocks do happen! Manaus is a hot, sweaty jungle city, and coping with the climate will mean a lot on the day – for both players and supporters!

Review:
I beleive if you are soccer fan then brazil is always be in your mind to Buy real twitter followers visit Brazil is a wonderful country with full of talented and lovely people and Brazil is a perfect place for world cup buy twitter retweets