As the news of the anti-gay law passing in Russia has flooded the media, thousands of people all over the world have taken a stance on the issue by claiming their boycott of the 2014 Winter Olympics. Even bars from across the globe have taken part in this boycott by refusing customer’s to purchase any sort of Russian-made liquor, specifically Russian vodka. 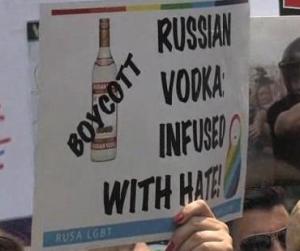 So why boycott the 2014 Winter Olympics? The outlaw of “propaganda of non-traditional sexual relations” to anyone under the age of 18 has outraged many mainly because of the already established threats to the gay and lesbian community in Russia – a country that is very outspoken about it’s liberal views on divorce, abortion, and adultery but lacks the more modern stance on homosexuality.

Many of those who are together in boycott of the 2014 Winter Olympics feel as though the country hosting any Olympic games should be open and understanding of all genders, races, and now sexuality.

Another point of concern is the fact that this new law gives law enforcers the ability to become more aggressive towards gay and lesbians within the community because of the ignorant thoughts of linking homosexuality and pedophilia.