So, having an interesting in the cultural vernacular and British rhetoric, I decided to head to Hyde Park earlier today to watch all the people stand on their soapboxes and sell whatever they wanted at Speakers Corner. A whole gaggle of people were crowded around four different speakers, one of which was a man dressed in a Viking helmet, holding a rubber chicken who kept commenting about the ladies which watched him.

He asked the people give him topics to talk about, it was really weird seeing this kind of unique cultural dialogue. Apparently Speaker’s Corner has been hosting these kind of things since the late 1800’s.

Anyone can speak their mind, or challenge those who are speaking—which was the greatest part of all. 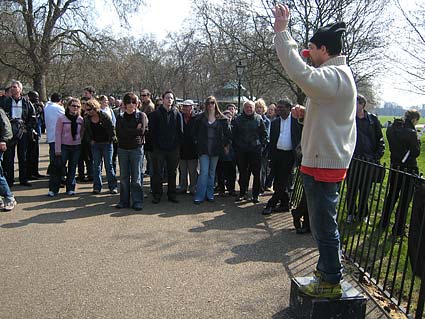 I was introduced to my first taste of British religious fanaticism, as I thought was unheard of here. Well, apparently it’s real and it’s almost just as bad as the American kind, Okay, not Westboro Baptist bad or anything, but still.

They had a whole barrage of speakers take turns holding signs or talking about the good word, or going to hell. Children weaved through the audience trying to pass out pamphlets about their church and whatever sect of Christianity they were a part of.

It was really awkward saying no to the cute kids who’s parents made them do this.

Okay, so I might not have sold you on Speakers’ Corner—yet. It was all quite boring until a man in rather raggedy clothes meandered into the mix.

He was the absolute best heckler I had ever heard in my life! He refuted every statement made by any of the people on the speaker boxes with the wit and charisma of a full-fledged professional.

There’s no doubt that he has probably been doing this for a while now, but still! I tried taking a video, but it was really hard to make out, and searching youtube for it just brought me to a bunch more hecklers who come rattle up the masses.

Even though it’s kind of known as a “crazy people” conglomerate, I think the dialogue that it brings is really important in creating discourse, even if it’s for the mere spectacle almost. I’m not sure what we have back in the states that is in the same vein, but it was definitely an interesting experience—plus it’s right by a Primark.