So, I was really worried coming here that I wouldn’t be able to find any vegetarian food in London, but surprisingly, I’ve found a ton and even lots of vegan food here. I live right near a giant whole foods, which is INSANE, like its way healthier than a normal American Whole Foods, how is it possible you ask?

Well they’re really into health here, so a lot of the food is raw or super healthy looking. Normal grocery stores like Tesco or even just any random convenience store has healthy options.

If you’re vegetarian, they have faux fish and chips at almost every local pub! This is great news for people like me who miss eating fish!

Some of my favorite places so far have been Ms. Cupcake which is a deliciously quirky vegan cupcake joint in South London—not the best area, but still cute and fun. The bakers were cute rockabilly-looking girls and had tons of little treats and knick-knacks in their shop.

222 was a good restaurant, it was exactly what I needed after a very cold day, I got a delightful little turkey and mashed potato dinner then a wonderful desert crepe. It’s nice and quiet, but a bit of a job from the Tube station, or maybe I was just being a pansy and it seemed like it took forever, oh well, whatever. 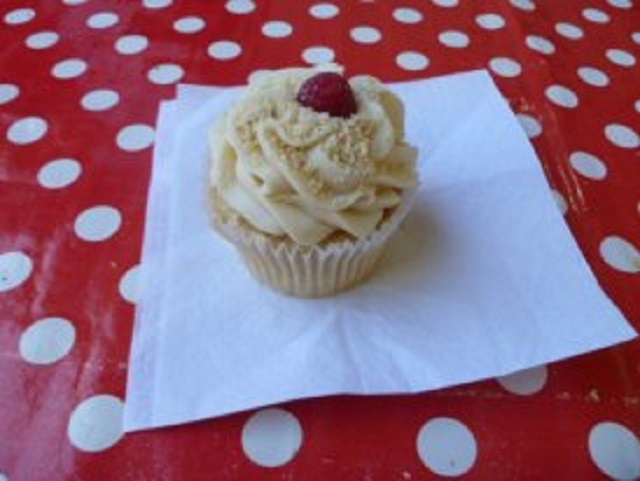 In Camden, which you totally need to check out, there was a great vegetarian buffet which was mostly Chinese food. It was really good, there’s nothing like stuffing yourself silly with lots of fried balls of god-knows-what!

Also, in Camden I went to a Loving Hut! If you’ve been a veggie for any amount of time you’ve probably eaten at a Loving Hut at some point or another, I’m not the biggest fan, but surprisingly I found it to be really good! They had great vegan fish and chips and other interesting combinations that I’d never seen before.

You don’t really need to seek out veggie food in London though, most places have some sort of option on their menus. I love the sandwich shops everywhere, you can get a great quick bite at Pret-a-Manger (Prey ah mahn-jay) and it’ll keep you full! 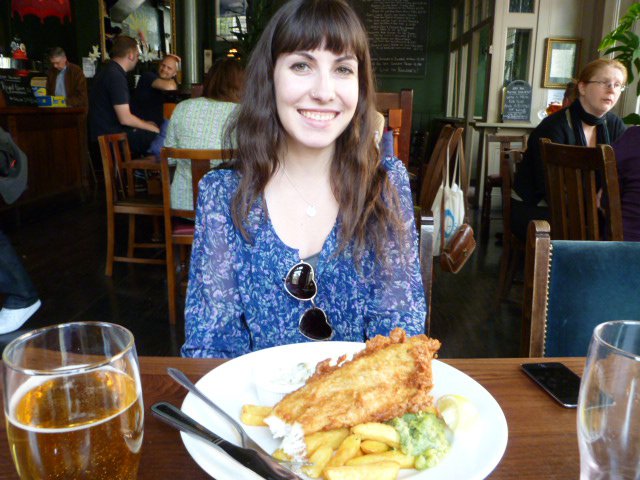 Tara laughing at my fake fish, while she eats a real one.