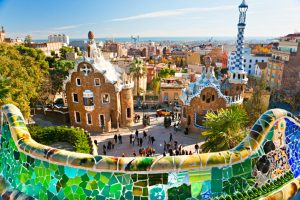 Madrid may be Spain’s capital, but Barcelona is rivalling its status as the country’s greatest city. Attracting more than 8 million tourists each year, the vibrant and exciting city of Barcelona simply has a phenomenal amount to offer its visitors. Football, sangria and sun aren’t the only reasons people love this place. Even despite its growing number of tourist traps (not to mention several pick-pocketing hotspots) Barcelona has fast become a place of global admiration, hosting a range of international events, from the Mobile World Congress to the famous European Poker Tour. The city is guaranteed to charm you for the below reasons and many more…

Barcelona’s Mediterranean climate sees an average temperature of 28C during the summer, sometimes even hotter in the months of July and August. The warm weather and sunny beaches are part of what makes Barcelona the ultimate summer destination.

Spain is globally famous for its distinctive cuisine; which typically features wholesome ingredients with hot and spicy seasoning. The endless number of tapas bars in Barcelona make for great places to grab a quick bite during lunch – especially if you’re a fan of ‘jamon’, Spain’s famous ham. For vegetarians, the city is also home to a great vegan scene, with plenty of organic cafes serving up veggie dishes and vegan cakes. Paella should of course be sampled in Barcelona too – along with a chilled San Miguel beer. The best thing about eating in Barcelona is how there’s an eatery to suit every budget, whether you’re looking for a fine dining experience, or a €3 ‘bocadillo’ (the local custom is to top the baguette with french fries!).

There are few other places in Europe which so expertly blend city life with beach life – but Barcelona has mastered the amalgamation, proving that you can in fact combine business with pleasure. Imagine working in a place where you can head straight from your office to the beach and enjoy an after-work drink with friends by the sea. The city’s man-made beach was built for the Olympic Games in 1992, and has since then played a hugely important part of the city lifestyle. There’s no shortage of green in the city, either – with its many gardens and natural parks. Cycling is a common and easy means of transport throughout Barcelona, making it more environmentally friendly than other major European cities.

The influences of Picasso, Dali and Gaudi are evident all across Barcelona. Gaudi’s colourful architecture reflects the free-spirited nature of Barcelonans, whilst Picasso and Dali’s legacy leave a lasting sense of experimental creativity in the city. Incredible street art created by young and talented artists can be found everywhere, whilst the city’s modern art museums showcase cutting-edge installations from around the world.

Barcelona is especially famous for its diverse and unusual buildings, with architectural styles ranging from Gothic to Art Nouveau – sometimes all on one same street. From the unfinished Sagrada Familia to the surreal Casa Milà, Barcelona is a treat for anyone interested in the art of architecture.

The luxurious Passeig de Gracia is lined with glamorous shops selling everything from Gucci handbags to Rolex watches, but shopping in Barcelona is certainly not only for those with cash to splash. The city is filled with alternative, crafty and second hand stores which sell one-of-a-kind items. Some fashion stores sells clothes by weight, whilst several book shops offer exchange deals – leave a book to take a book. This unconventional approach to retail makes Barcelona a unique and highly enjoyable place in which to go shopping.

The mix-match of cultures in Barcelona contributes toward its diverse, exciting and cosmopolitan identity. People from all walks of life live, work and study in this inclusive city, reflected in the wide range of activities, festivals and eateries you can find here. There are frequent social events organised by and for communities which share nationalities, languages, interests or professions. It’s also worth mentioning that most shops and cafes are pet-friendly. In other words, the open-minded culture of Barcelona is as laid-back as it is welcoming.  It doesn’t matter where you’re from or what your occupation is – you’ll feel at home in Barcelona.

Barcelona indisputably offers one of the best party scenes in all of Europe. Numerous trendy and experimental mixology bars provide excellent environments in which to share a cocktail with friends before heading to the popular clubs along La Rambla or the beach. The city also caters for those who prefer a quieter type of nightlife, with plenty of wine bars and roof terraces on which to spend the evening – perhaps accompanied by some live music.

With all this to offer, and so much more, is it any surprise Barcelona is overtaking Madrid as Spain’s most popular city? If you think Barcelona doesn’t deserve a place on your list of favourite cities –  think again.